Risky drinking – defined as drinking at levels that put a person at risk of medical or social problems – has for centuries been viewed as an affliction of youth and immaturity. Yet, as the first wave of baby boomers reach retirement age, a startling trend is revealing itself: older adults are now drinking more than any previous cohort of retirees, with over 40 percent of older drinkers in some Western countries being classified as ‘hazardous drinkers.’ 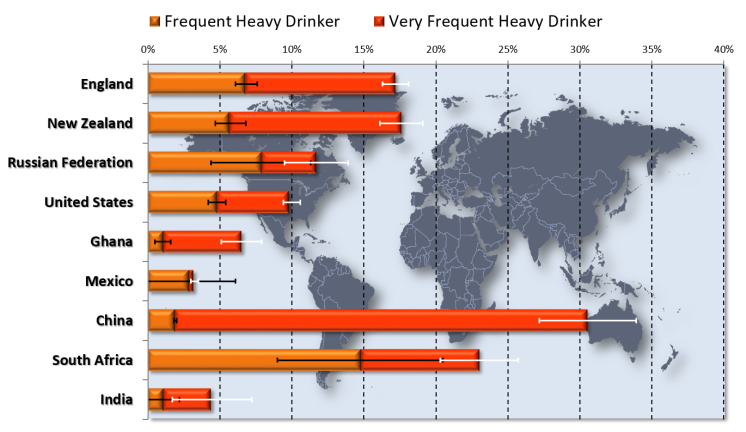 There are three key reasons why rising rates of drinking among older adults should spark international concern.

Unfortunately, our current health systems are ill-equipped to cope with this trend: in an era of rapid population ageing, a wave of older adults drinking at risky levels places considerable pressures on current health systems. Alcohol is the principle choice of drug for the ageing population and, although many do not meet the criteria for a substance use disorder, a large proportion will still require intervention to address the adverse consequences of excessive alcohol consumption (REF: Savage). Indeed, the number of older adults requiring substance misuse treatment services in the United States alone was expected to triple in the first two decades of this century (REF: Gfroerer). Given a rising rate of risky drinking despite the increased risk of harm and reduced likelihood of detection by health professionals, it is little wonder that the UK Royal Society of Psychiatrists now refers to older drinkers as ‘our silent addicts’.

What can we do? Fortunately, there is one key way in which we can collectively help mitigate this public health challenge.  As former American supreme court justice, American Lawyer Louis D. Brandeis (1856-1941) once said “Publicity is justly commended as a remedy for social and industrial diseases. Sunlight is said to be the best of disinfectants.” This sums up the critical issue here: many older drinkers are just unaware of their risk levels because society does not realize that there is an issue to address. We have the evidence that shows many older adults are now drinking hazardously, despite the risks this poses, so now it is up to each of us to start talking to friends, family members, colleagues, health professionals and policymakers about it.

Dr. Andy Towers is a senior lecturer in the School of Health Science at Massey University (New Zealand). His teaching and research focus primarily on alcohol and drug use trends, policy and outcomes. In conjunction with colleagues at the University of Auckland (New Zealand), he leads a collaboration of researchers from the United States, Europe and the World Health Organisation in an international study of the global prevalence of older adults drinking patterns and health-related outcomes.