Who Are You? Where Am I?

In an effort to increase awareness for the first annual National Memory Screening Week held Nov. 1-7, Vicki Tapia, author of Somebody Stole My Iron, has joined with four other authors of books about dementia/Alzheimer’s. This article describes the campaign and presents a brief synopsis of their books.

It was the weekend of our family reunion and almost everyone was gathered together at my parent’s condo to celebrate a milestone. Our patriarch, my dad, was turning 90. When the front doorbell rang, Mom opened the door, took one look at her oldest granddaughter and asked in a perplexed tone of voice, “Who are you?” After a moment of silence, we all laughed a little uncomfortably, but brushed it off, rationalizing the comment as a manifestation of Mom’s stress in caring for Dad, who had been diagnosed with Parkinson’s disease. It was not mentioned again.

Our family continued to somehow normalize or overlook the ever-increasing signs that something was not quite right with Mom’s behavior. Another two years passed before she finally agreed to be evaluated by her health care provider, around the same time Dad was diagnosed with Parkinson’s-related dementia. Although by this time, our family wasn’t completely surprised by Mom’s Alzheimer’s diagnosis, we were alarmed to hear she was already considered to be in the “moderate” stage of the disease. I later learned this scenario is typical.

Studies tell us that the delay in diagnosis can be attributed to the family’s own denial in not wanting to face the fact that something is wrong. In retrospect, this could be applied to our family, although in many ways, we were simply clueless in the beginning. Sometimes, a fear of diagnosis can result in reluctance on the part of the affected person to agree to an evaluation, particularly if it involves an adult child prodding an intractable parent. Healthcare costs may also be a factor in avoiding an assessment by a qualified health care provider (HCP). The oft-perceived stigma associated with a potential diagnosis of dementia/Alzheimer’s can be a barrier to evaluation for the entire family.

In an effort to promote the importance of early detection of memory problems, the Alzheimer’s Foundation of America (AFA) has launched the first annual National Memory Screening week scheduled for Nov. 1-7.

The screenings will be free and confidential, and if deemed necessary, refer people onto appropriate follow-up services. One of the goals of the screening is to work toward eliminating the stigma and fears associated with dementia. The AFA also hopes to alleviate fears for people who participate in the memory screening, but do not show a concerning memory problem.

For more information about the screening (date, time) and a list of participating sites, visit National Memory Screening.

Who should consider having a memory screening?

If you or a loved one answer “yes” to any of the following questions provided by the AFA, it may be prudent to participate in the free memory screening. 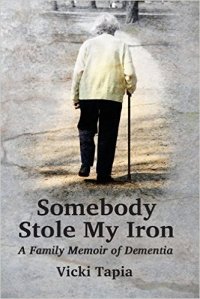 The scene described in the opening paragraph of this blog post is based on an excerpt from my memoir, Somebody Stole My Iron, which details the daily challenges, turbulent emotions, and many painful decisions involved in caring for my parents. Laced with humor and pathos, reviewers describe my book as “brave,” “honest,” “raw,” “unvarnished,” as well as a “must-read for every Alzheimer’s/dementia patient’s family.” I wrote this story to offer hope to others whose lives have been intimately affected by this dreadful disease, and to reassure them that they are not alone.

Four other engaging books about dementia/Alzheimer’s disease that I am pleased to recommend include:

On Pluto: Inside the Mind of Alzheimer’s by Greg O’Brien

Greg’s story is not about losing someone else to Alzheimer’s, it is about losing himself. Acting on long-term memory and skill, coupled with well-developed journalistic grit, O’Brien decided to tackle the disease and his imminent decline by writing frankly about the journey. “On Pluto is a book about living with Alzheimer’s, not dying with it.”

Jean’s memoir details her journey caring for both parents who were diagnosed on the same day. It is written with wincing honesty about the cruel affects of the disease, but a World War II love story held together by faith and family is contained within the pages.

Marianne describes herself as a writer who happens to be a nurse. She writes this work of fiction based upon her care for the elderly. It is a tenderly told love story about Jack and Sara, owners of a New England bed and breakfast. Sara is stricken with Alzheimer’s and Jack becomes her caregiver. 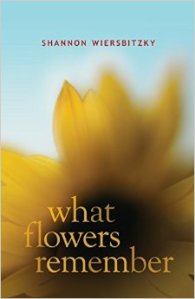 What Flowers Remember by Shannon Wiersbitzky

Shannon writes this work of fiction through the eyes of a young girl, perhaps not surprising, as her author bio notes that her own grandfather had Alzheimer’s. In the story, when thirteen-year-old Delia Burns realizes that her elderly neighbor is beginning to forget, she involves the entire town in saving his memories.

Vicki Tapia, long-time lactation consultant and published author of numerous lactation articles, found her energies redirected to the other end of life when both her parents were diagnosed with dementia in 2004. Her diary documenting their journey resulted in the publication of Somebody Stole My Iron: A Family Memoir of Dementia, a 2015 finalist for the High Plains Book Awards. The mother of three grown children and eight grandchildren, Vicki lives with her husband and Mini Schnauzer in South Central Montana, USA.

One response to “Who Are You? Where Am I?”